描述
Bob is very interested in the data structure of a tree. A tree is a directed graph in which a special node is singled out, called the "root" of the tree, and there is a unique path from the root to each of the other nodes. 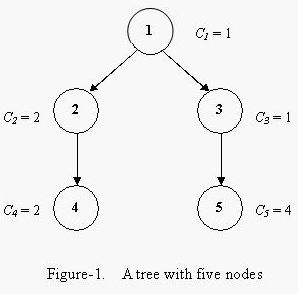 Given a tree and the coloring cost factor of each node, please help Bob to find the minimum possible total coloring cost for coloring all the nodes.
输入
The input consists of several test cases. The first line of each case contains two integers N and R (1 <= N <= 1000, 1 <= R <= N), where N is the number of nodes in the tree and R is the node number of the root node. The second line contains N integers, the i-th of which is Ci (1 <= Ci <= 500), the coloring cost factor of node i. Each of the next N-1 lines contains two space-separated node numbers V1 and V2, which are the endpoints of an edge in the tree, denoting that V1 is the father node of V2. No edge will be listed twice, and all edges will be listed.

A test case of N = 0 and R = 0 indicates the end of input, and should not be processed.
输出
For each test case, output a line containing the minimum total coloring cost required for Bob to color all the nodes.
样例输入
样例输出
来源
Beijing 2004